Home SCIENCE This hot summer is one of the coolest of the rest of...
SCIENCE 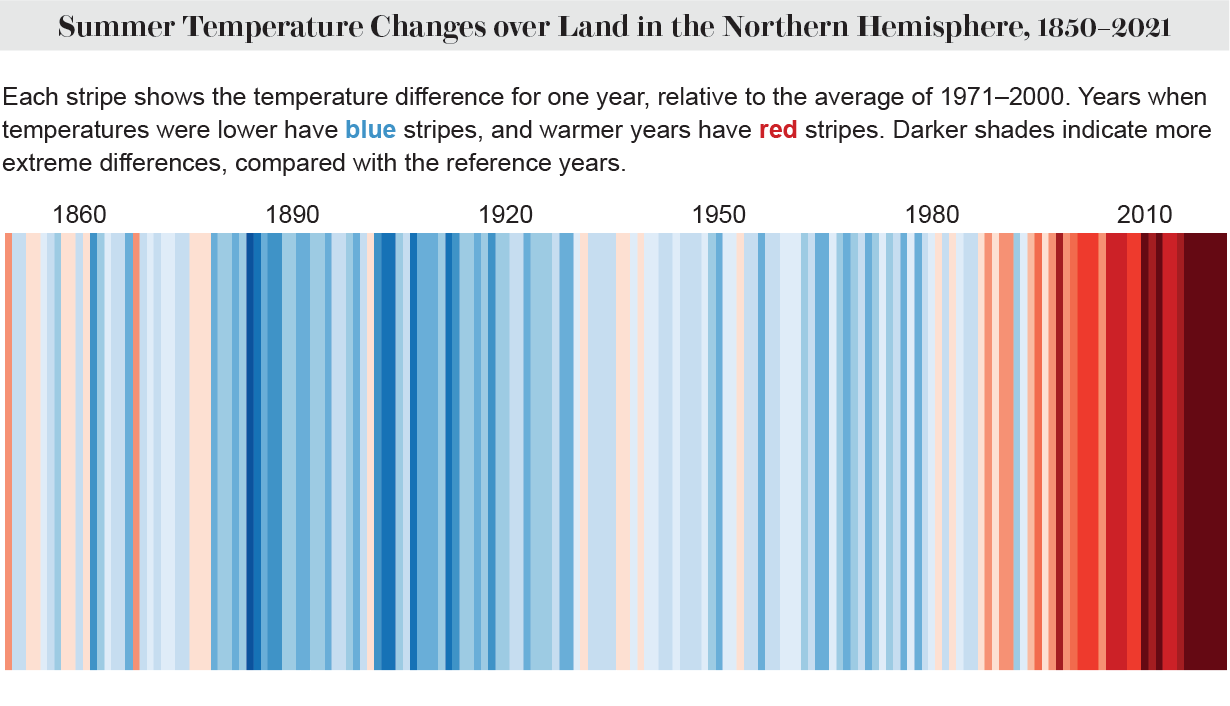 Extreme heat has been a constant in the news this past summer: In July, a heat wave in Europe pushed temperatures in parts of the UK above 104 degrees Fahrenheit (40 degrees Celsius) for the first time on record. That same month was terrifyingly hot across China, including in Shanghai, home to 26 million people, which tied its highest July reading of 105.6 degrees F (40.9 degrees C). And even before summer officially began, scorching heat settled over the southern US in May. Amarillo, Texas, recorded its earliest day with temperatures topping 100 degrees F (37.8 degrees C), and Abilene, Texas, endured 14 straight days of 100 degrees and higher, doubling its previous streak.

Those were just a few of the events that contributed to Northern Hemisphere land areas experiencing the second-warmest June and third-warmest July on record, according to the National Oceanic and Atmospheric Administration. But the temperatures that make the news today may seem dull, even relatively cold, a couple of decades from now, as the continued burning of fossil fuels drives baseline temperatures higher and higher. Heat waves are also getting longer and more frequent. Not every summer will be hotter than the last, of course, but global warming means that the heat records set today will eventually fall down the charts. As US Secretary of Commerce Gina Raimondo said during the launch in July heat.gova government website for heat information, “The reality is that, given scientific predictions, this summer, with its oppressive and widespread heat waves, is likely to be one of the coolest summers of the rest of our lifetimes” .

In a world without man-made climate change, we would expect to see records set quite randomly, following the vagaries of our planet’s natural climatic variations. But global warming has effectively loaded the dice, with record heat outpacing record cold. This imbalance is clearly evident in the famous “warm band” charts created by climate scientist Ed Hawkins of the University of Reading in England. These graphs represent each year’s average temperature as a shade of red or blue, depending on how far above or below the long-term average it is. The following version shows summer temperatures going back to the mid-19th century for Northern Hemisphere land areas, relative to the 1971–2000 average. Although there are occasional pink or orange years sprinkled throughout the record, the accumulation of deep red bars over the last few decades is immediately obvious. Even 1998, which at the time was by far the hottest summer (and year) on record due to an exceptionally strong El Niño event, has been far surpassed. Similarly, the 1990s were replaced as the hottest decade by the 2000s, which was later replaced by the 2010s. The 2020s will eventually follow suit.

Of course, natural variation still plays a role from year to year and from month to month. For example, July 2021 was the warmest July on record for land in the Northern Hemisphere, while this July ranked third. Such variations become more pronounced the more locally one looks. A relatively small area like the UK can still have summers with normal temperatures in any given year. “For an individual, wherever they live, there will be cooler summers than this in the future,” says Hawkins. For example, in England, which bore the brunt of last July’s European heat wave, many of the past few summers have seen temperatures at or below the long-term average. And several hot summers from the 1970s, 1980s and 1990s are still among the hottest in England, including the standout summer of 1976, which remains a touchstone in the country’s collective memory. (That summer saw prolonged heat and drought, the latter of which also helps to raise temperatures.)

This ever-increasing baseline means that when heat waves hit, they are worse than they would have been in the absence of climate change. An analysis of last July’s UK heatwave by scientists from the World Weather Attribution consortium found that, in the absence of climate change, temperatures during such an event would have peaked at 96.8 degrees F (36 degrees C). In another decade or two, a similar event would likely see temperatures even higher than those recorded this summer.

Even heat waves that don’t set daily temperature records can get worse with climate change. Although the southern US is accustomed to hot summers, several prolonged heat events this year saw highs over 100 degrees F in large areas for multiple days. Because of this, Texas recorded its hottest April-July on record and the average high temperature for July exceeded 100 degrees F for the first time. “There weren’t, say, 10-day periods that are huge off the charts, but it’s been relentless,” says NOAA climate scientist Derek Arndt. A recent Washington Post analysis of data from the nonprofit First Street Foundation found that long periods of warm weather become more frequent and last longer in the United States, particularly in the South. Nearly half of all Americans now experience at least three consecutive days of 100-degree or higher heat each year, and that will increase to two-thirds in the coming decades. Some parts of the South could see 70 such days in a row.

And daytime temperatures aren’t the only consideration. The overnight lows have been rising much faster than the daily highs, as can be seen across the contiguous US in the chart below. From a health standpoint, evening is when the body typically takes a break from the summer heat, so as nighttime lows increase, that recovery period becomes less available. “You can’t calm down, so the next day you start at that high level,” says Thompson. This can have a huge impact on physical and mental health.

The ability of populations to cope with increasing and more frequent heat extremes is a key concern of the current climate emergency. Several places that are famous for having cooler summers, such as the UK and the US Pacific Northwest, have not built the infrastructure to deal with extreme heat. Many homes in these and other areas lack air conditioning, which many cannot easily afford. These limitations make it more likely that people will suffer from the harmful health effects of heat. Even in areas accustomed to hot weather, like Texas, prolonged extreme heat can increase air conditioning use and overload the power grid.

Exactly how hot our future summers will be, and how miserable we’ll be on hot nights, is, to some extent, in our own hands. The more we reduce the burning of fossil fuels now, the more we can limit the global temperature rise that is causing increasingly hot summers. But even if we control greenhouse gas emissions, we will still have to live in a warmer climate than in the past. That reality means helping people adapt, whether it’s by building or upgrading infrastructure to withstand the heat, subsidizing air conditioning, or simply making sure people have ample warning about extreme heat and know how to avoid it. its harmful effects on health. “It’s our choices that make the difference,” says Hawkins.

Unearthing everyday life at an ancient site in Greece

As the sun reached its peak, waves of heat rose from the cypress-clad hills around me. The turquoise waters of the Ionian Sea...
Read more
SCIENCE

The composition of the Earth was modified by collisional erosion | Sciences

Isotope measurements suggest that collisional erosion has an outsized role in understanding the distribution of Earth's elements.
Read more