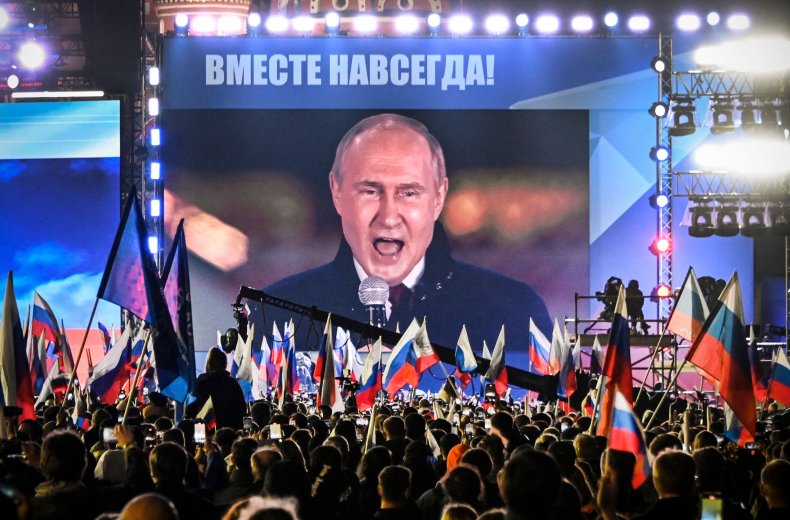 A Russian official who appealed to the country’s parliament to remove President Vladimir Putin from power on charges of high treason now faces mandatory military service under the leader’s partial mobilization decree.

Dmitry Baltrukov, a 43-year-old municipal deputy from Smolninskoe in St. Petersburg, was fined 44,000 rubles ($758) last month under the protocols on “discrediting” the Russian military, a strict new law that cracks down on dissent in the war against Ukraine.

It came after he and other MPs from the area called for Putin to be removed from power over the Ukraine war.

Baltrukov said news week that military registration and enlistment clerks and policemen came to his home on Sunday, where his mother was, to serve him with a summons as part of Putin’s partial mobilization decree of September 21, even though he had no military experience.

But those who are not eligible to be called up, including students, have also been mistakenly given summonses to serve in Ukraine.

“Yesterday, four people came to the address where I checked in. My mother saw two policemen and two men in uniform, she asked who they were and what they needed,” Baltrukov said. “They said they were from the military registration and enlistment office and that they had brought me the summons.”

Baltrukov, who is currently on a business trip, said officials said he had to report to his local military enlistment office at 9 a.m. local time Monday.

“They came to me on purpose and judging by the presence of the police and the desire to open the door inappropriately, I think they wanted to immediately arrest me,” he said, noting that he did not follow orders to go to military enlistment. office and advising others not to too.

The deputy said he believes he was targeted, despite not being eligible to be drafted, as he has been an outspoken opponent of Putin’s war against Ukraine.

“Since I have no military experience, I think the real reason for the agenda is an attempt to get rid of me as a deputy,” Baltrukov said. “I believe that what is happening is aimed at eliminating me as a political opponent and taking revenge for my position in handling the charge of treason against Putin. And a categorical rejection of war.”

Since Putin declared a partial mobilization last month, there have been multiple reports of ineligible men being called up for military service.

In a rare admission on Thursday, Putin said “all the mistakes” made in the mobilization efforts must be corrected. He also said anyone recruited despite not meeting criteria set by defense officials “should be sent home.”

Commenting on Putin’s comments, Baltrukov said he believes that for some time “there has been a big gap between Putin’s words and reality.”

“He certainly talks about fixing bugs, but the system can only work in this way and nothing else,” Baltrukov said.

Putin’s decision to declare a partial mobilization of the population is “another big mistake, like the very beginning of the war,” the official added.

“I doubt that the call of even a large number of purely civilian people can turn the tide of the war,” he said.

If a quarterback is judged on a team's wins and losses, then Santa Ana Mater Dei's Elijah Brown and Chino Hills Ayala's Bryan Wilson...
Read more

Alisa Bowen has been named president of Disney+, in a promotion for the executive who has overseen the global business operations of Disney's streaming...
Read more