Even a limited nuclear war would kill billions, study finds 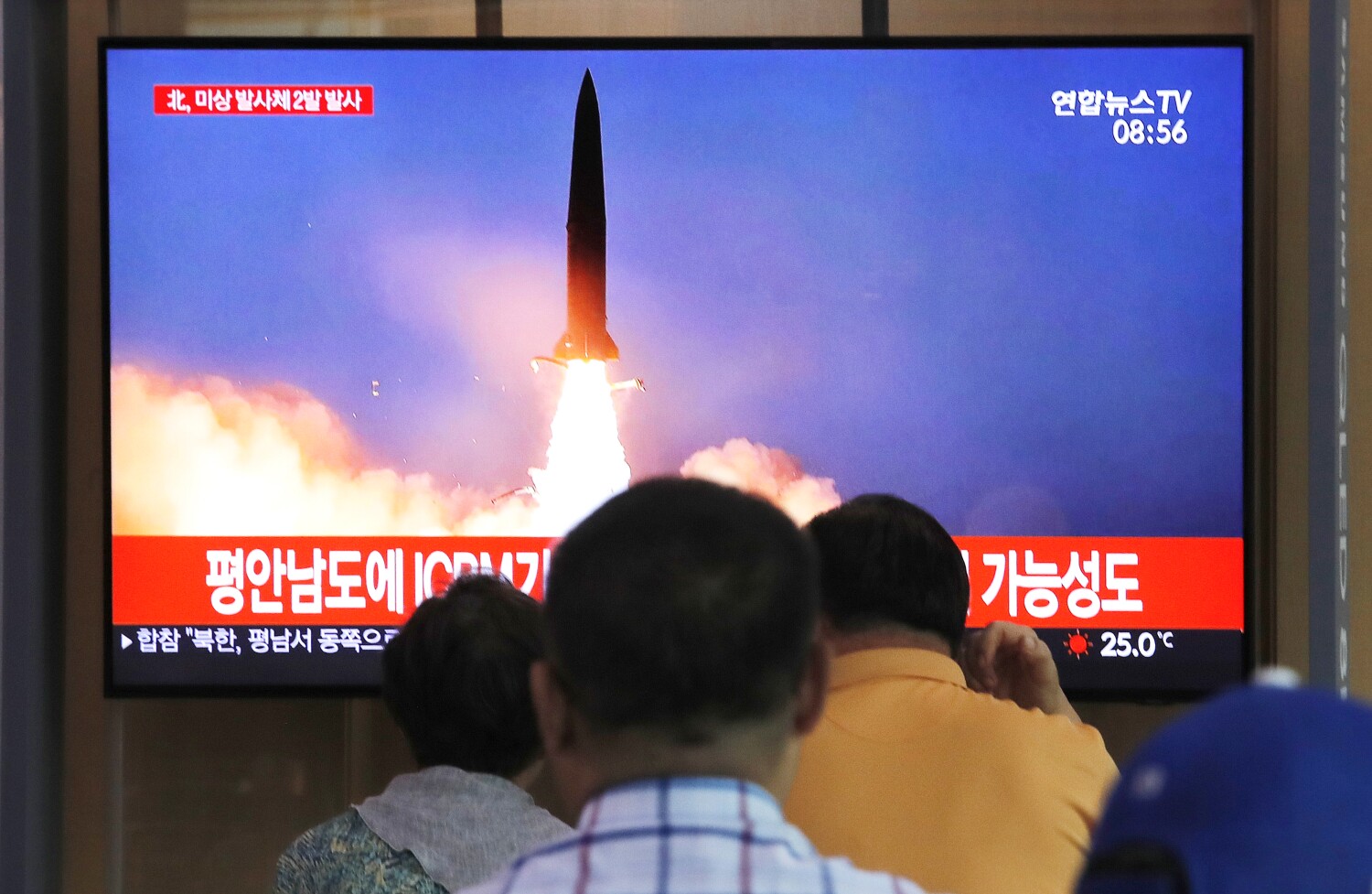 As rising tensions between the United States, Russia and China revive old fears of nuclear war, some researchers are warning that even a limited-scale exchange between nations like India and Pakistan could have catastrophic consequences for the world’s food supply and lead to deaths. massive all over the world.

“It’s really a warning that any use of nuclear weapons could be a catastrophe for the world,” said climatologist and study author Alan Robock, a distinguished professor in the Rutgers Department of Environmental Sciences.

The findings come at a time when, 30 years after the end of the Cold War, the threat of a nuclear holocaust may be greater now than ever.

Recently, UK National Security Adviser Stephen Lovegrove argued that the breakdown of dialogue between nations, as well as the loss of safeguards that had been created between the nuclear superpowers decades ago, has plunged the world into “a dangerous new era.” Secretary General of the United Nations Antonio Guterres so i warned that “the prospect of nuclear conflict, once unthinkable, is now back within the realm of possibility.”

Although Robock and others have previously projected that nuclear war would result in tremendous disruption to the climate and food supply, the recent study marks the first time researchers have calculated the potential extent of famine that would result and how many people would die.

The detonation of even a small fraction of the world’s nuclear weapons would trigger massive firestorms that would rapidly inject sun-blocking soot into the atmosphere, causing a sudden cooling of the climate, the researchers theorized.

The researchers used climate models to calculate how much smoke would reach the stratosphere, where there is no precipitation to remove it, and how temperature, precipitation and sunlight would change. They then calculated how these changes would affect the production of various crops, as well as how fish would respond to changes in the ocean.

That’s without taking into account the effects of increased ultraviolet radiation on crops due to the destruction of the ozone layer caused by warming of the stratosphere, Robock said. Such an effect, which the researchers hope to quantify in future studies, would likely worsen outcomes, he said.

“In my opinion, our work is an existential threat to nuclear weapons: it shows that nuclear weapons cannot be used,” Robock said. “If you use them, you are like a suicide bomber. You’re trying to attack someone else, but you’ll starve to death.”

The data comes on the heels of a growing consensus among experts that the threat of nuclear war is greater than ever, said Ira Helfand, immediate past president of International Physicians for the Prevention of Nuclear War.

“The general public needs to understand the enormous magnitude of the danger we face, the immediacy of the threat, and the urgency of eliminating these weapons before they eliminate us,” he said.

Most of the scenarios the researchers considered involved a hypothetical nuclear conflict between India and Pakistan, which they believe is the most likely region where such a conflict could break out, Robock said. The two countries have fought four wars and still have frequent border skirmishes.

If India and Pakistan were each to target the opposing country’s urban centers with 250 100-kiloton nuclear weapons, which they are believed to possess, about 127 million people in South Asia would die from explosions, fires and radiation, according to the study. . An estimated 37 million metric tons of soot would be injected into the atmosphere, causing global temperatures to drop by more than 5 degrees Celsius, a range last experienced during the Ice Age, according to previous research. of Robock and others. Consequently, food production would collapse, with the amount of calories available from major crops and fisheries falling by as much as 42%, and the resulting famine would kill more than 2 billion people worldwide, according to the most recent study. .

In the event of a larger war between the US and Russia, which together are believed to possess more than 90% of the world’s nuclear stockpiles, an estimated 5 billion of the 6.7 billion people in the world would die. around the world, according to research.

But any of the nine nuclear-armed nations, which also include China, North Korea, France, Israel and the UK, have enough firepower at their fingertips to cause immense suffering and death around the world. , with soot rising into the sky and triggering a domino effect of catastrophic cooling and famine, the study suggests.

Although it’s not possible to test the theory directly, there are real-world analogs, Robock said. Massive wildfires in British Columbia in 2017 and in Australia in 2019 and 2020 belched smoke into the stratosphere, a finding confirmed by satellite observations. The sun then heated the smoke particles, lifting them five to 15 miles higher into the atmosphere, he said.

“By raising them higher, you increase their lifespan and they fly around the world before they fall off,” Robock said. “It’s the same process we modeled in our nuclear winter simulation with a lot more smoke.”

Edward Geist, a policy researcher at the Rand Corp., said the relatively recent discovery that wildfires can spew smoke into the stratosphere bolsters the researchers’ theory. They are doing the world a service by drawing attention to the potential effects of nuclear war, he said.

Still, there is debate about the extent to which solar uplift would occur with nuclear detonation, Geist said. While it’s certainly possible for it to happen in a city attacked by nuclear weapons, that doesn’t necessarily mean it will happen simultaneously in all the cities that are attacked, as the newspaper assumed, he said.

“The big question is, you have a nuclear war of a certain size, how much of this smoke ends up in the upper atmosphere?” spirit said. “You can make a plausible case for both: very little will end up there, until the end, we have to assume that basically everything ends up there, which is what [these] types of papers do.

He noted that a 2018 paper by researchers at Los Alamos National Laboratory also modeled a hypothetical conflict between India and Pakistan and concluded that previous research by Robock and others had overestimated the amount of soot that would be produced, how high the smoke would reach, and the magnitude of the impact. the weather would change as a result.

Robock, however, disputes those findings. The Los Alamos researchers chose a suburban area of ​​Atlanta to represent a dense city in India or Pakistan and did not include atmospheric processes such as cloud formation that would carry air upward in their models, he argued. Robock said they also assumed winds were too strong and ran their simulation for too short a time.

“They had a number of assumptions, all of which made the effects much smaller,” he said.

A 2020 paper by researchers at the Lawrence Livermore National Laboratory also considered the India-Pakistan scenario and concluded that there were uncertainties. Although the team projected that an exchange of 100 15-kiloton nuclear weapons would cool the climate if densely populated urban areas burned, they projected that there would be little or no effect on the climate if the fires were confined to suburban areas.

In contrast, the Rutgers-led study assumes countries would target each other’s cities, where fuel concentrations are denser and weather effects would be more dramatic, Geist said. But Pakistan has said that if it were to use nuclear weapons against India, it would use tactical nukes to stop a conventional invasion, not to attack cities wholesale, he said.

“It really comes down to how much stuff you burn, how much ends up as smoke, and how much of that smoke ends up in the upper atmosphere, and how many actual plausibles for nuclear wars translate to that,” Geist said. “We really don’t know, and we hope we don’t find out.”

Although there is a popular idea that nuclear weapons will never be used because they are so powerful that their destructive capacity is a deterrent, that is wishful thinking, Helfand said. That they have not yet been deployed is simply a matter of chance.

“We know what’s going to happen if these weapons stay,” he said. “Sooner or later our luck will run out.”

What is Ebola and why is the Ugandan outbreak so serious?

It is proving more difficult to treat as there are no vaccines available for a rare strain of the virus.
Read more