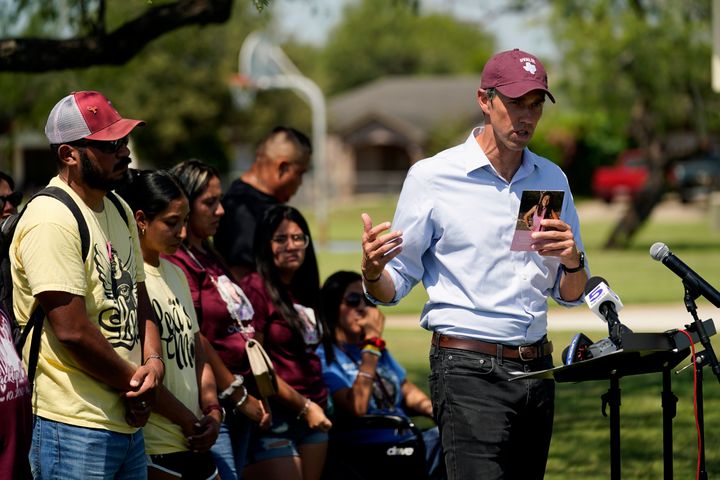 Thirty-five family members of those affected by the May school shooting that left 19 children and two teachers dead traveled by bus for five hours to show their support for O’Rourke ahead of a debate Friday between him and the Republican governor. Greg Abbot, the Texas Tribune Reports.

Family members of those killed in the shooting included the parents of 10-year-old Alexandria “Lexi” Rubio.

“I speak directly to moms when I say our babies’ lives are on the ballot,” Lexi’s mom, Kimberly Rubio, said at a news conference before the debate. “It happened to me; it can happen to you. And this pain, it will bring you to your knees.”

Abbott has been routinely criticized for his response to the deadly mass shooting and his unwillingness to support gun control measures. Hours after the shooting, Abbott took a plane to attend a fundraiser in Austin for several hours.

O’Rourke has been outspoken about the need for tighter gun control and officials’ lukewarm response after the mass shootings. When officials, including Abbott, held a news conference a day after the shooting, O’Rourke interrupted it to remind them of her inaction.

You are not doing anything. You all are doing nothing,” O’Rourke told officials.

And during a town hall event in August, O’Rourke silenced a rioter who laughed when O’Rourke described assault rifles as a weapon of war.

“It might be fun for you, you son of a bitch, but it’s not fun for me, okay?” O’Rourke said to applause from the crowd.

The Uvalde families who support O’Rourke have expressed support for raising the minimum age to purchase an AR-15 style rifle from ages 18 to 21.

During Friday’s news conference, Felix Rubio, Lexi’s father, said he fought in the war and came home, only to have his daughter die at school. ABC News reports.

“I went to war and came home,” he said. “My daughter was going to school and was murdered in her classroom. I fought for my country abroad and now I fight for changes.”

Gloria Cazares, the mother of Jackie Cazarez, age 9, who died in the shooting, said she is fighting to prevent another mother from suffering like her.

“There is nothing I can do to bring my daughter back,” Cazares said. “But I’m fighting for the mom-to-be who will one day be in my place, who will blame herself for dropping her daughter off at school after the awards ceremony in the morning.”

To stream the NBCU shows featured in this piece, sign up at Peacock

WASHINGTON – The Supreme Court, with Justice Ketanji Brown Jackson on board as its newest member, opens its nine-month term Monday by hearing a...
Read more

Mother Teresa and the ‘Sisters Who Stay’

Saint Teresa of Calcutta, known during her lifetime as Mother Teresa, passed away on September 5, 1997. The 25th anniversary should be...
Read more

Life expectancy in the US fell in 2021 for the second year in a row, but covid deaths are not the only reason

Life expectancy in the US fell for the second year in a row in 2021, falling nearly a year from 2020, according to a...
Read more